What has happened a year after the cyber attacks against several large companies worldwide? Which kind of measures have been taken by the companies to avoid attacks in the future? The financial effects of the cyber attacks are still not fully assessed, cyber–attacks were estimated to cost businesses from 450 billion USD upwards. Well, not much has happened since then. Although much of effort and money has been put into IT security measures. Banks used to be the primary targets of cyber attacks, now companies operating in infrastructure, transport, the health care sector, production, in the oil and gas industry are also in focus for cyber attacks.

Cybersecurity has to be a top priority for managing directors and board members. Besides training the staff on security issues and potential attacking strategies all technologies and IT infrastructure in use have to be secured. In order to do so the appropriate tools have to be introduced to analyse data streams, collect log-in-data and combine information, evaluate and detect possible threats with modern security systems.

The collection and analysis of logs from various sources of a network (server, clients, network devices, firewalls, applications, etc.) is essential in order to get information about security-relevant events. Out of millions of events those need to be effectively and efficiently identified, which indicate abuse of IT and applications, internal or external attacks or other threats.

Companies have to invest in their IT security because cyber criminals also invest time as well as money in their preparations and implementation of their attacks. Attacks like WannaCry show how much effort is put into these attacks. At the same time companies show too much attack surface.

Cybercrime has become an industry which is no longer limited to PCs and laptops. Since the development of Iot and industrial technology the attack surface has become even bigger.

This proverb is not only true in everyday life, but also for company’s data and technology security. Looking back a couple of years, cyber criminals used to be extremely interested in getting company data in order to sell it or gain direct access to bank accounts. Due to new possibilities the strategies have changed. Ransomware has become one of the fastest growing kinds of cyber attacks.

IT connectivity keeps expanding and presents cyber criminals with new gateways into IT systems. A continuously and centrally managed IT security monitoring of the whole infrastructure is indispensable.

Radar Cyber Security continuously monitors the entire IT infrastructure and applications and evaluates all data results, specifically searches for weaknesses in systems and their configuration and intelligently analyses the network traffic.

Because of its approach none of Radar Cyber Security’s customers have been affected by WannaCry: In early March 2017 a patch was released. The team of the Security Operations Centre informed each customer and afterwards reviewed if all customers had patched their systems. When WannaCry swept the globe on a Friday, May 12th, 2017, security analysts made additional ad-hoc scans therefore offering customers an extra service. The result was more than satisfactory: none of Radar Cyber Security’s customers had been affected.

Radar Cyber Security’s Security Operations Center (SOC), available as a Managed Service or as a Solution, is quickly up and running. Experts, cutting-edge technology developed in Europe and well-functioning processes protect values. Thanks to the use of modern security technology based on machine learning and the advanced correlation engine threats are promptly detected. 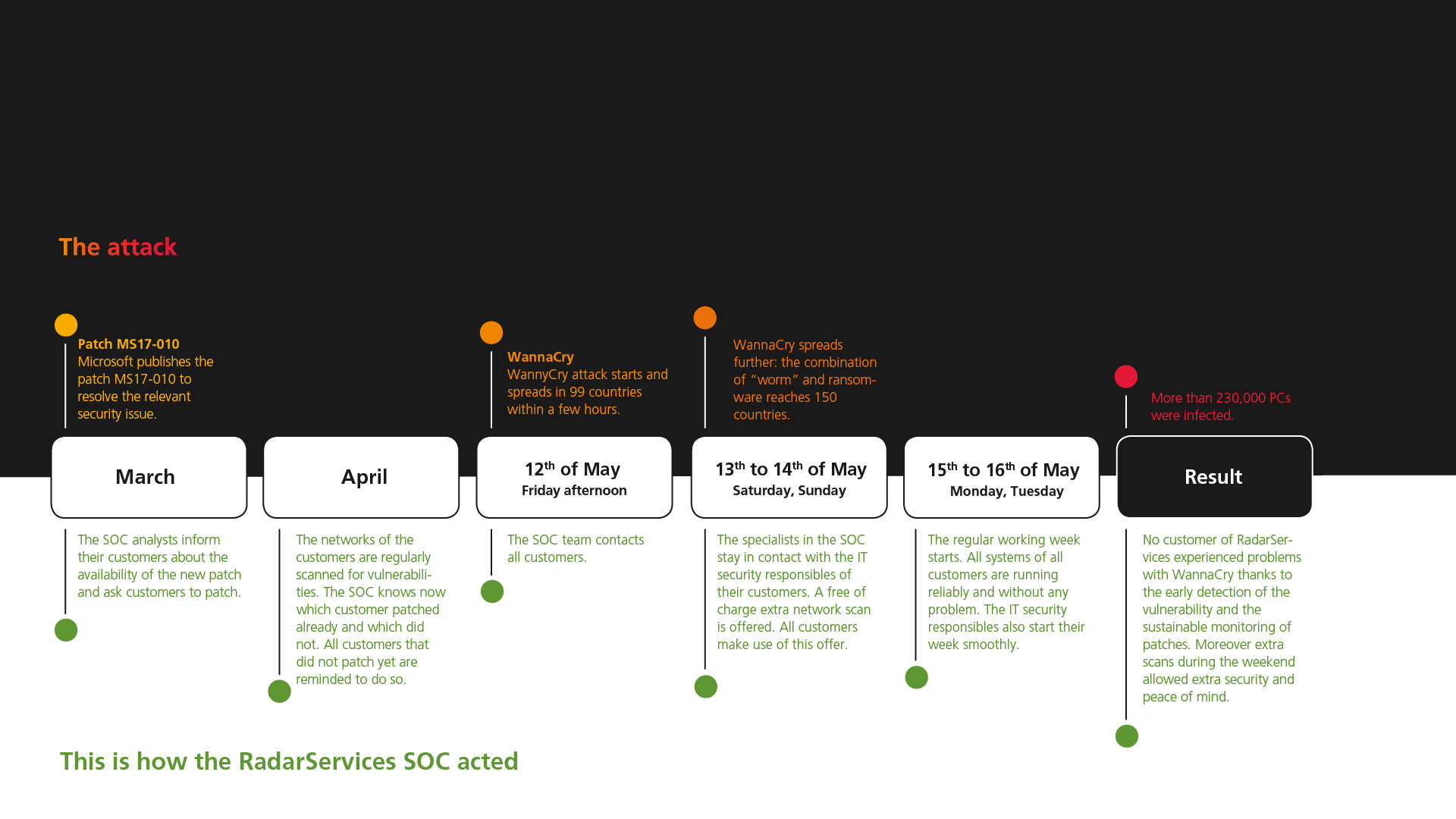